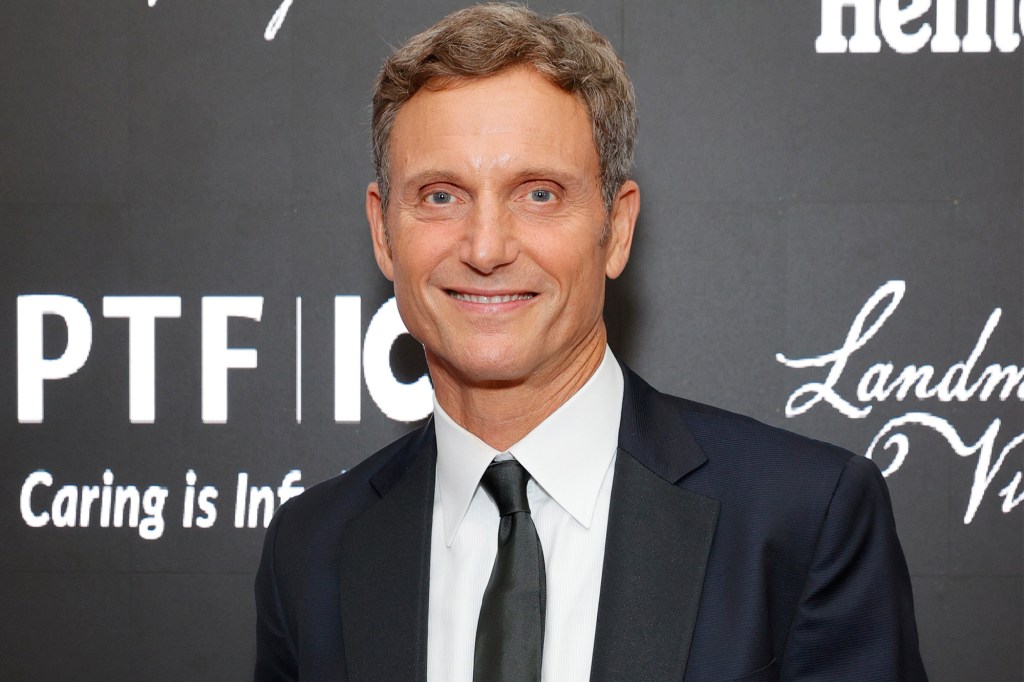 Spun Gold at the shows

Tony: “Before these daughters were born, Richard envisioned them as tennis champions and wrote a 75-page manifesto, although he knew nothing about the game and taught himself to play on public courts. He envisioned the classic way of hitting the ball. NOT frontward. The positive position was sideways. One foot in front of the other. Opposing the ‘open facing the ball’ stance, he and their coach argued.

“I play the coach and their real-life differences changed their relationship. Richard correctly became the standard and his way changed the game.”

So do you play tennis?

“I learned to play it the old-fashioned way. So I do a combination — front and side. Listen, I get blisters on my feet. I play it but only for a few hours.”

The Warner movie is out the 19th.

Comic had it rough and tough

Jackie Martling, Howard Stern’s onetime witnit, screened his own documentary, “Joke Man,” in his own Long Island hometown Bellmore’s Playhouse Theater with his own friends and family. They loved it. It showed a tough upbringing. Alcoholic family. Killed them. Nearly killed him. Now sober. Tough marriage. Etc., etc. He tells how he fed jokes to Stern for 15 years, kept records of every joke he wrote and into the camera he laments not everyone has stayed his friend. “Joke Man” is making the rounds of all the video services.

Michelle Williams will play Queen Catherine, sixth and last wife of Henry VIII — that’s Jude Law — in a psychological thriller told from Catherine’s point of view . . . And Ryan Gosling gets to play Ken opposite Margot Robbie’s Barbie in the upcoming Barbie movie. Greta Gerwig, who co-wrote it with Noah Baumbach, directs . . . AND good news. NYC’s famous Russian Tea Room, again open, is busy and feeding borscht, caviar, pierogi and buttery chicken . . . New York is waking up. Cardinal Dolan’s again blessing the animals for Radio City Music Hall’s Christmas Spectacular. His Eminence and I share our love for animals — his dog is named Pickles, mine’s Jellybean, and he invites me along with him. So to view a Cardinal, a camel and a Cindy, it’s tomorrow. Right on Sixth Avenue, directly in front of the marquee, 9 a.m.

Will Rogers said: “I’m not a member of any organized party, I’m a Democrat.” Since them Dems don’t realize the USA is not into socialism, Vegas oddsmakers give the GOP 10-6 in favor of taking back the House. Our now rotting country is suffering from “buyer’s remorse.”

And: “In Trump Time: A Journal of America’s Plague Year” is by Peter Navarro, ex ass’t to President DJT for trade policy. However, with ships stranded and nothing getting traded since Buttigieg, who Biden named Transportation Secretary but whose background was mayor of a town smaller than a clogged nostril, can’t bother with America. He and his Internet-found husband are too busy breast-feeding their infants. And when CNN’s Dana Bash pushed him on transportation, he dissolved into the needs of child care. Out Tuesday, the book’s already pre-sold 200,000 and torches Fauci. Navarro: “My agenda’s to burn down the House of Fauci. Revelations about him are coming.”