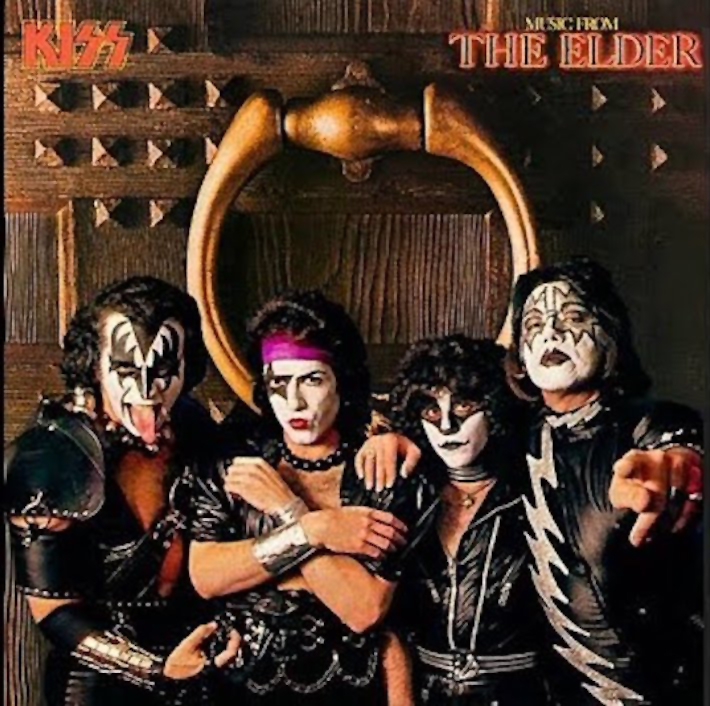 1981 was a tough, transitional year for KISS, following the replacement of original drummer Peter Criss with Eric Carr, so the hard-rock titans decided to move in a bold new direction with an orchestral prog-rock opera, Music From “The Elder.” The risky concept album was based on a good-vs.-evil, light-vs.-darkness fairytale initially scrawled on Beverly Hills Hotel stationery by the band’s Gene Simmons — a coming-of-age story about a starry-eyed protagonist known as “The Boy,” who is recruited by the Council of Elders to a heroic freedom-fighting troop called the Order of the Rose, and then mentored by a wise old caretaker named Morpheus.

Gee, what could possibly go wrong?

Well, at the time, it seemed like a lot could go right. The Elder reunited KISS with legendary Destroyer producer Bob Ezrin (a seemingly exciting development for old-school fans who’d been turned off by KISS’s previous two pop/disco-flavored albums, Dynasty and Unmasked), and it featured lyrics by none other than Lou Reed on “Mr. Blackwell,” “Dark Light,” and “A World Without Heroes.” It was even intended to be a fantastical feature film starring of-the-moment Meatballs/My Bodyguard teen actor Chris Makepeace as the Boy and possibly Patrick Stewart as Morpheus, according to Simmons. But the album, KISS’s ninth, wasn’t at all what fans wanted from the band, and it utterly bombed upon its release on Nov. 10, 1981.

KISS did not tour Music From “The Elder” — the first KISS album to not go gold in the U.S. — and they have rarely performed any of its tracks in the years since, aside from a memorable “A World Without Heroes” on MTV Unplugged in 1995. Original guitarist Ace Frehley, who reportedly hurled a tape of The Elder against a wall after his solos were edited out of the final mix, left the lineup soon after the record’s failure. And needless to say, that Elder movie never happened. Makepeace did record some spoken dialogue for the album, but his contributions also didn’t make the cut, and all he got was a mysterious “thank you” in the sleeve’s credits.

While Music From “The Elder” was a disaster at the time, the band recovered, and the undeniably ambitious venture has since experienced a slight critical assessment, with Classic Rock magazine even including the record on its list of “The 20 Most Underrated Classic Rock Albums Ever.” But judging from this new Yahoo Entertainment interview, KISS’s Simmons and Paul Stanley haven’t grown much fonder of this flop undertaking over the past 40 years. Here, they discuss what exactly happened in ‘81, with their usual candor and a surprising amount of self-awareness and self-deprecating humor.

Yahoo Entertainment: I hope you will indulge me, because this year is the 40th anniversary of a record that I think was not critically understood at the time, but has kind of gotten a renaissance. And that’s Music From ‘The Elder.’ Classic Rock magazine ranked it among the list of the “20 most underrated classic rock albums ever.” I know it was kind of in the middle of a transitional phase for KISS. What was the mindset going into such an ambitious project that was a big risk at the time?

Paul Stanley: We were lost. We were delusional. We had become complacent and kind of ungrateful for the success that we had and what it was based on. So, we were lazy, and I think we had all become very comfortable in a rich, so to speak, lifestyle, and became more concerned with how our contemporaries viewed us rather than our fans. And I think the fans were forsaken. We couldn’t make a rock album. We had no teeth. We were gumming at that point.

Gene Simmons: When you do anything, you want authenticity and honesty. That was a dishonest record. … The Elder was misdirected. We were very popular and played stadiums and stuff. And when we had a change in the lineup — [Peter Criss] had succumbed to some of the cliches and the rock ‘n’ roll, and all of us, Ace and Paul and myself, voted for him to be out of the band. So we got a new guy, Eric [Carr], God bless him, who unfortunately passed away. And we had some time off. And I was at the Beverly Hills Hotel, of all places, because I started to fool around with movies and meeting those kinds of people — going to Paramount, all that stuff. And eventually I’d wind up doing a few movies and producing some, but it wasn’t the real thing for me. And I started writing. And the first thing I wrote was on the Beverly Hills Hotel stationery: “The Elder, when the Earth was young, they were already old.” It started with a story treatment that I wanted to turn into a movie — a Tolkien-esque of a thing, with inspiration from The Watcher from Marvel and so on. … We brought Bob Ezrin back, who had produced possibly our best record, Destroyer, up until then. … It was Bob Ezrin who said, “Let’s do a concept record. Gene, I like your story. Let’s craft songs based on your story.”

Stanley: When we got together with Bob Ezrin, I’m really hoping that he would help us save the ship, so to speak. We all just jumped on this idea of, “Well, we’ll show people! We’ll show them how smart and musical we are!” That really came from going, “Well, we can’t at the moment — we can’t rock.” … You can’t get away from Bob’s discography and his credits, whether it was really shaping Alice [Cooper] and the band into what they were. I mean, I saw that firsthand when we worked together on Destroyer. … Bob was intrinsic and so important, certainly to Alice. And, The Wallis a testament to his brilliance, and Destroyer was a real boot camp for us. Quite honestly, I think we were all hoping to do something great. And when you fall, and you fall off eight-inch heels, you fall hard.

Yahoo Entertainment: I always wondered, because right around the same time that Music From the Elder the album came out, there had been The Wall movie, and Bob Ezrin had worked on The Wall. So I always wondered if Pink Floyd’s The Wall, was that all an inspiration for you to have your own Wall?

Simmons: Well, the real story behind The Elderwas this kind of self-deluded notion: “Hey, the Who had Tommy! Let’s have our own Tommy!” And why do you need that? You know, it’s like, Zeppelin didn’t have Tommy. And they did fine.

Stanley: It was lunacy.

Yahoo Entertainment: You did work with Lou Reed on The Elder, though, which is pretty cool. I mean, a lot of rock bands would be pretty happy to be able to say that.

Simmons: So, [Ezrin] got Lou Reed to come up for a day and we started fooling around with lyrics, and it was written sideways on one of Lou’s papers: “A world without heroes.” And immediately all of us said, “That’s a cool title. That’s great. What about a world without heroes? A world without heroes is no place to be.” And so on. So, the song wrote itself, based on some of the stuff Paul had, which was, “Every little bit of your heart…” Paul was writes more sort of romantic kind of things. … It’s what you [women] want to hear.

Stanley: What came out was, I don’t particularly think, very good; at times, it’s hammy. Most of my vocals on there. If you’ve ever seen the Little Rascals, how Alfalfa would sing in a pseudo-operatic voice, or try to.

Yahoo Entertainment: So, was it ever really envisioned to be a stage production or a film?

Simmons: Yes. We actually had Chris Makepeace. He was an actor at the time who had just come off My Bodyguard. … And he was actually cast in the lead role and we started to actually cast it. I don’t remember if Patrick Stewart was involved as Morpheus; he might’ve been. But, it started to get some legs. And we were going to do a motion picture, but like most movies now, over 95 percent never get made, even though there are scripts and everything. So, we had a treatment based on — I mean, my treatment — but it stopped there and we kind of gave up on it.

Stanley: That’s how delusional we were. We could just as easily talk about launching a rocket to Mars, you know. I mean, you can talk about it, but actually there’s so much that goes into it. And quite honestly, if you were going to send a rocket to Mars, you need a rocket and fuel. And as far as The Elder, I don’t think we had either. … It was forced, and I think the songs were not great. And we were full of ourselves.

Simmons: There are a few songs I like. I like “I,” which was semi-autobiographical about my stance about anti-drugs: “I believe in me.” Why would I hurt my body and my mind? I believe in me. There were a few decent songs on there. But the thing that was missing was the honesty of it. It was a misdirected album.

Stanley: There were a lot of problems within the band, and Bob was having his share of problems, and it was an album that to me was just a picture of a bunch of people who were lost. You had to be there to know just how difficult it was to see it through to the end. And that was nobody’s fault in particular. It was all of us. It was just symptomatic of all of us not being in a good place.

Yahoo Entertainment: Well, I appreciate it for what it was.

Stanley: And that doesn’t mean that your opinion isn’t as valid as mine! … So, if Classic Rock or somebody wants to think it’s underrated, God bless them. That means we sold six copies.

· Paul Stanley talks Soul Station, masculinity and the importance of wearing masks: ‘To not be able to voice my opinion actually seems un-American’

· Gene Simmons recalls producing early Van Halen demos — and why he tore up their contract: ‘They owe me nothing’

· KISS’s Gene Simmons talks COVID vaccinations: ‘I’m a firm believer that this should be a law’

· #NoMakeupSunday: When KISS bared their faces on MTV