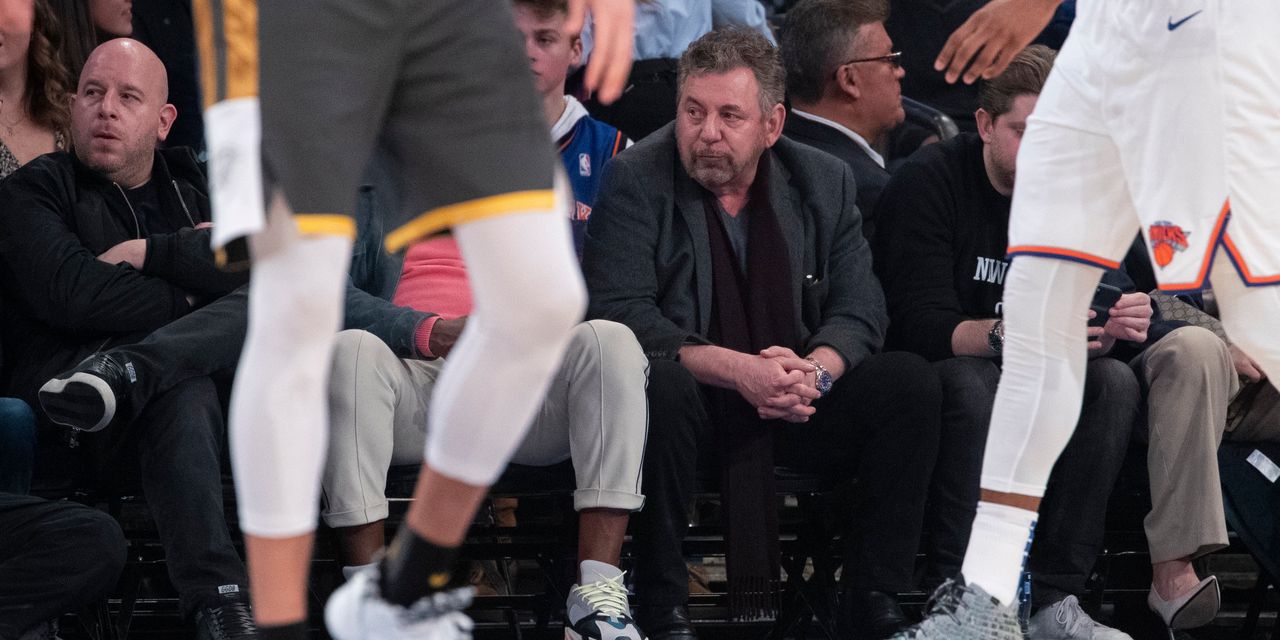 The companies controlled by New York’s Dolan family sometimes suffer from what Wall Street calls the Dolan discount—a perception that the family won’t act in the interest of all shareholders.

That’s the case now, following a poorly received merger in July of

Since talk of a deal surfaced in March, shares of MSG Entertainment have slid 40%, to around $70. While the merits of the merger are debatable—the company argues there are financial and tax benefits—the damage has been done.

The result is that investors can buy three attractive companies—

“Is there a Dolan discount in MSG Sports and MSG Entertainment? The answer is absolutely.”

The two teams may be the most valuable properties in the National Basketball Association and National Hockey League. Forbes magazine recently increased its estimate of the Knicks’ value to $5.8 billion from $5 billion. That’s more than MSG Sports’ current market value of $4.5 billion. Investors effectively get the Rangers, a team appraised by Forbes at $1.65 billion, for free.

Jonathan Boyar, president of Boyar Research, values MSG Sports at $285 a share. Morgan Stanley analyst Benjamin Swinburne valued the company more conservatively in August, at $250 a share, but still a nice premium to the stock price.

Online sports gambling, due to start in New York in the next few months, looks like a big plus for both MSG Sports and MSG Entertainment because of advertising, fan engagement, and a potential sports book in Madison Square Garden.

“Is there is a Dolan discount in MSG Sports and MSG Entertainment? The answer is absolutely,” Boyer says. “If the Dolans weren’t the controlling shareholders, these stocks would be trading significantly higher.”

An MSG spokeswoman said that the Dolan family companies have “built a history of creating substantial, long-term value for shareholders, beginning as far back as


Cablevision—and we expect that track record to continue.”

Boyar agrees that the Dolans, led by James Dolan, the chairman of the three companies, have a strong long-term record. Dolan is unpopular with Knicks fans because of the team’s poor record in the past decade, but the Knicks made the playoffs for the first time in eight years last season.

“Not selling the company has been the right move, despite investor pressure, because of the increased value of the teams,” Boyar says. The various MSG companies have outperformed the


S&P 500
since their spinoff from Cablevision in 2010, the company calculated in May.

In addition to owning the Garden in Manhattan, MSG Entertainment has air rights above the arena.

MSG Entertainment is also building what could become a major tourist attraction in booming Las Vegas, a concert and entertainment venue with 17,500 seats called the Sphere. The project, now expected to cost $1.9 billion, is due to open in 2023. The company hasn’t provided financial projections but some think it can earn $200 million in annual profits. Boyar values MSG Entertainment at $123 a share, a price that assumes a conservative $1.5 billion value for the Sphere.

Then there is AMC Networks, which has the hit series The Walking Dead and others on AMC, plus offering the IFC, Sundance, and BBC America cable channels. (It is no relation to meme stock


AMC Entertainment Holdings (AMC).) AMC also has streaming platforms that it projects will have a total of nine million subscribers at year-end. AMC stock, at $40, has one of the lowest valuations of any media company at under five times this year’s estimated earnings.

“AMC Networks is more than reasonably priced,” says Robert Routh, an analyst at FBN Securities. “AMC has proven franchises that have value,” he says, especially given the demand for content while “so many platforms are being launched.”

Routh has an Outperform rating on AMC and values it at $68 a share. There are a limited number of available programming properties following industry mergers, and AMC has a very digestible market value of $1.7 billion—plus $1.9 billion in net debt.

To invest in Dolan-controlled companies, Routh says investors must accept being “junior partners” to the family. The current discounts on the stocks and the quality of the businesses seem sufficient offsets to that.