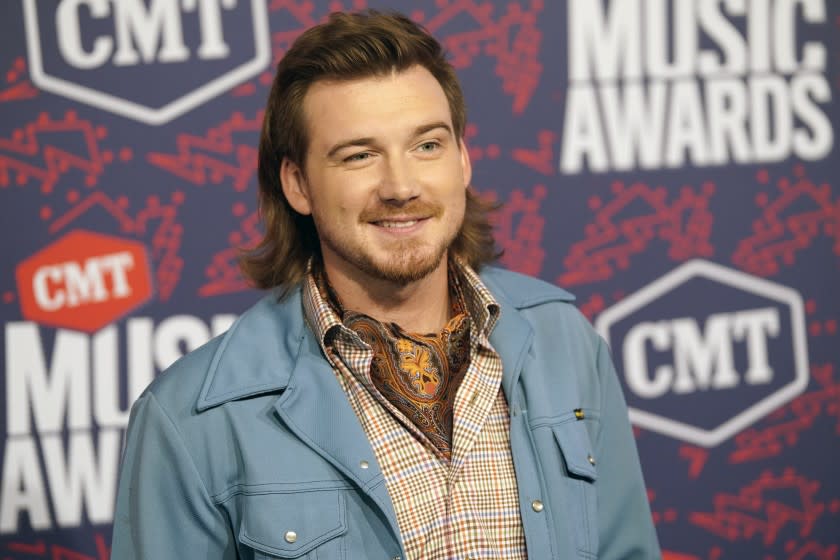 Country musician Morgan Wallen landed two nominations at the 2021 American Music Awards. But he won’t be attending the show.

The AMAs announced Thursday that Wallen has been banned from the ceremony at Los Angeles’ Microsoft Theater after the “Whiskey Glasses” singer was filmed saying the N-word earlier this year.

The fan-voted awards show is the latest music institution to take action against Wallen, who is also prohibited from attending the Country Music Assn. Awards in November.

“Morgan Wallen is a nominee this year based on charting,” the AMAs said in a statement. “As his conduct does not align with our core values, we will not be including him on the show in any capacity (performing, presenting, accepting).”

In May, Wallen collected three Billboard Music Awards, including country artist and country album, despite not getting invited to the show because of “his recent conduct.”

In February, Wallen said he was “embarrassed and sorry” he used the racist slur, which he deemed “unacceptable and inappropriate.” During a July interview with “Good Morning America,” the “Wasted On You” artist claimed he was intoxicated and “ignorant” when he said the word.

“GMA” anchor Michael Strahan pushed back on that explanation, saying, “Even when you’re drunk, there are certain things you do and you don’t do.”

After seeing a post-scandal spike in sales for his 2021 record “Dangerous: The Double Album,” Wallen pledged to donate a total of $500,000 to social justice organizations such as the Black Music Action Coalition. In September, the Black Music Action Coalition told Rolling Stone they remained “disappointed that Morgan has not used his platform to support any anti-racism endeavors.” The organization also called the $500,000 amount “exceptionally misleading.”

On Thursday, the AMAs said they would continue to “evaluate [Wallen’s] progress in doing meaningful work as an ally to the Black community and will consider his participation in future shows.”

The AMAs will air Nov. 21 on ABC at 8 p.m. Eastern and Pacific. Fans can cast ballots for their favorite musicians via the Billboard website or by searching “AMAs” on the TikTok app.