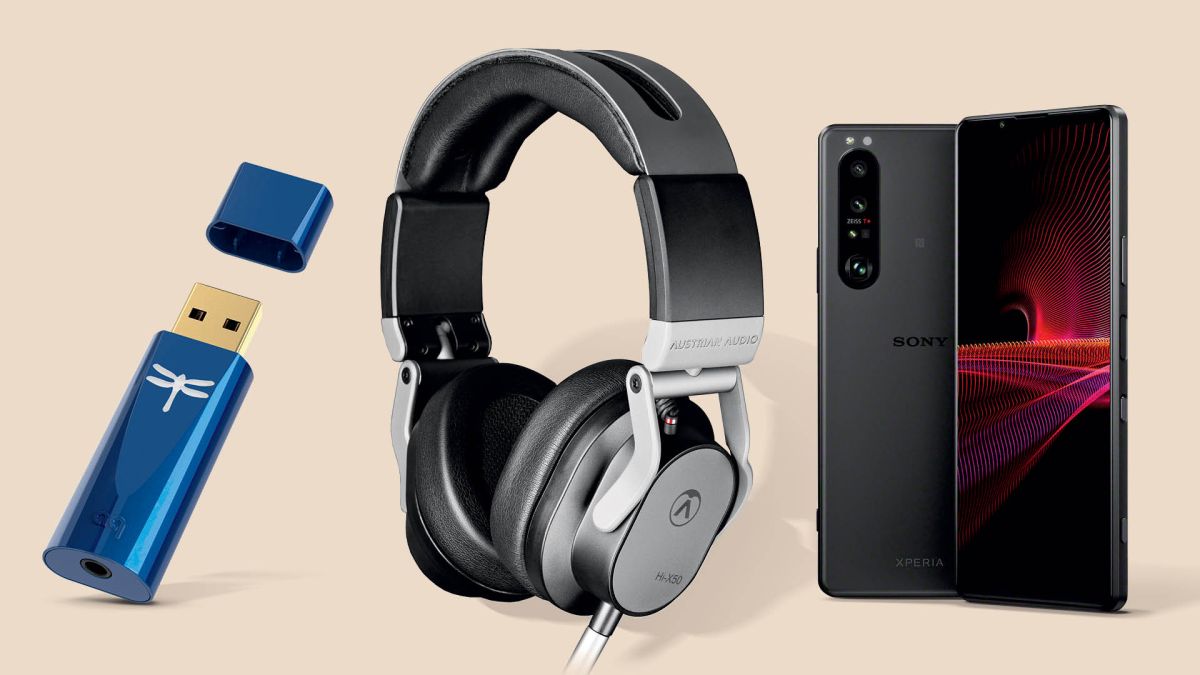 Just because you happen to listen to the majority of your music while you’re on the go, doesn’t mean you need to sacrifice sound quality.

Of course, for convenience’s sake, you could pair a smartphone with a pair of the best wireless earbuds, but there are compromises with that particular set-up, not least with the medium of Bluetooth.

However, if you’re willing to add a couple of different components to the equation (keeping a smartphone as the foundation) you can still build a system that’s portable enough not to trip you up but one that also doesn’t sacrifice anything in the way of performance.

Allow us to explain…

Don’t make the mistake of thinking you can’t get top quality sound from a smartphone. Get the components right, and there is a decent case to be made for a phone and a pair of headphones standing up very well as a hi-fi system. Give those two a bit of a polish with a thumb-drive sized DAC, though, and you’re in for a real treat.

It’s clear that a decent standalone personal music player from the likes of Astell & Kern or Cowon, say, will perform a bit better – but having one of those means carrying an extra, relatively bulky, handset; and this combination will provide most of a standalone player’s hi-fi capabilities in one neat package. And, as we all carry a smartphone around with us nowadays (we do all carry a smartphone around with us nowadays, don’t we?), the addition of a Dragonfly and a decent pair of headphones is a no-brainer for all but the über-serious music obsessive.

It seems Sony is on a hot streak when it comes to smartphones. The Xperia 1 III is the company’s latest flagship phone and while certainly falling in the ‘evolution rather than revolution’ category compared with its predecessor, is another excellent handset that is well worth considering if audio and video performance are key factors for you when choosing a mobile.

Crucially for us, Sony has eked out yet more audio and video performance from the new handset over the Xperia 1 II, which gives us even more reason to recommend it over what was already an Award-winning smartphone. Comparing the two phones, we’d be more than happy to recommend either based on their sound performance but we are impressed to hear there are marginal gains with the new model.

Bass notes sound a little tighter, meaning more control and agility, and it’s clear the Xperia is capable of dynamics to rival any phone on the market – and, indeed, plenty of dedicated hi-res players.

It’s not our primary point of concern for this particular feature, of course, but the world’s first 4K 120Hz phone screen sounds good on paper and it looks even better in reality. The refresh rate really does make scrolling through anything that much smoother, but it really comes into its own when playing games or watching video content. The Xperia 1 III refuses to ramp up the colours to lure your eyes, instead sticking steadfastly to offering up images that are remarkably faithful. Throw in bags of detail, smooth motion and careful handling of black levels and skin tones, and we think it will be hard to beat the video performance on offer here. Which, of course, is something we could never say about a personal music player.

The Sony is a lovely music player in its own right; but we still believe it is well worth adding AudioQuest’s DragonFly Cobalt digital to analogue converter. The DAC backs up its not inconsiderable asking price with the clearest, tidiest and most dynamic presentation we’ve heard from a unit this small.

It begins with a new, more advanced ESS ES9038Q2M DAC chip, with which AudioQuest promises a clearer and more natural sound than from the older Dragonfly Red, while the PIC32MX274 microprocessor draws less current and increases processing speed by 33 per cent. Improved power supply filtering, meanwhile, is said to increase immunity to wi-fi, Bluetooth and cellular noise.

The DAC’s LED will shine one of six colours to indicate sampling rate: red for standby, green for 44.1kHz, blue for 48kHz, yellow for 88.2 kHz, light blue for 96kHz or purple when decoding MQA. And the Cobalt does wonders in cleaning up performance, no matter what kind of file we feed it or whether it’s streaming from YouTube, Spotify, Tidal or playing from our own hi-res library.

Lines are indelibly drawn round the edges of each instrument, with granular detail on offer to complement the cleanliness and military precision. The Cobalt isn’t necessarily concerned with polishing your music, only the lens through which it can be seen: bedroom recordings can still sound intimately lo-fi, purposefully screeching treble remains uncensored and grisly riffs still drag their knuckles along the floor.

You could spend your time analysing the music if you like – the Cobalt makes that easy with its wide-open soundstage and impressive clarity – but AudioQuest has not lost itself entirely in the detail, still offering a keen sense of rhythm and expressive dynamic range. In both senses there is measurable progress over the cheaper, older versions of the Dragonfly. Timing is greatly improved, with beats locking in like puzzle pieces. The Cobalt’s hard work is also heard as it belts out grand dynamic shifts before donning its reading glasses to contour those more diminutive quivers. Put simply, the DragonFly Cobalt increases drive and dynamics, and takes things up to another level for a not unreasonable amount of money.

Which brings us to the third and final piece of this portable hi-fi puzzle. Austrian Audio is a fairly new company, but the people behind it are ex-AKG employees and some of the most experienced in the industry. That maturity shines through in the Hi-X50 on-ears. The headband structure is nicely designed and sturdy with it. The extensive use of metal in the headband, folding hinges and mounting brackets gives these cans an aura of quality lacking in more plasticky rivals. It helps that components prone to wear and tear, such as the headband cushioning and memory foam earpads, can be easily replaced, too.

These headphones are nominally for home listening, as the supplied three-metre cable suggests; but you can also buy a shorter 1.2m cable for listening out and about. And we believe you should do just that, despite the ‘professional’ tag these headphones are saddled with. There’s certainly nothing we found during testing or in the specifications to suggest that price-compatible portables will have any issue here – unless you count the Hi-X50’s forthright nature, that is.

These headphones won’t suffer fools gladly: if your source or the recording is bright or aggressive, these cans won’t sweeten the results. They’re ruthless but also pretty balanced on the whole, and that’s evidence of the company’s studio roots coming to the fore.

In this system, with the Sony smartphone and AudioQuest DAC doing sterling work, the Austrian Audio Hi-X50 truly prove their worth. We listen to a range of music, and these headphones never miss a beat. They resolve lots of detail and manage to organise it into a musically cohesive presentation. It’s a pretty even-handed sound, without much in the way of undue emphasis on any part of the frequency range.

Unlike the slightly more expensive and open-backed Grado SR325e, these headphones aren’t an overtly exciting listen. Mostly, they simply reproduce the signal they’re given. While there’s a tendency to favour analysis over enthusiasm, it’s never taken far enough to be called unemotional or clinical. If you want to hear deep into the recording and track subtle instrumental strands, these cans do it better than almost anything else we’ve heard at this level (certainly if you stick to closed-back rivals – which, if you are listening out and about, we really recommend you do).

At this price, there’s little to criticise when it comes to dynamic expression and low-frequency punch either. The Hi-X50 simply get on with the job with little fuss.

Indeed, ‘little fuss’ neatly sums this whole portable system up. These three impressive pieces of audio equipment combine together beautifully to create a revealing, dynamic system that will bring many hours of musical enjoyment.

How to build the perfect hi-fi system

coexist with the law