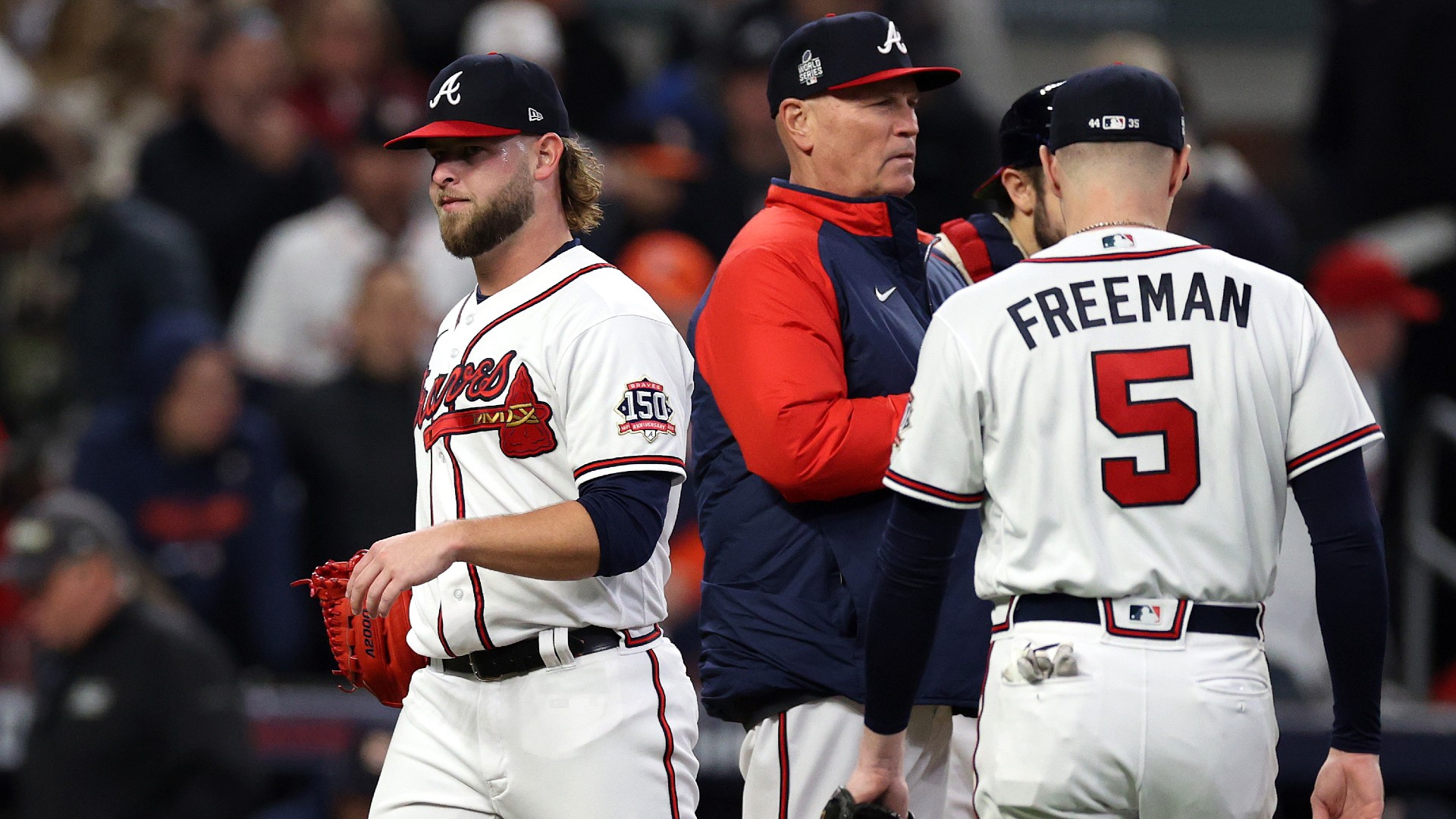 The Braves’ skipper had just one pitcher of the six who went in Game 4 on Saturday throw multiple innings, and coming into Game 5 on Sunday, but he knew the bullpen would be extra tired coming off two straight games with at least five pitchers used.

“When we won yesterday, it made it easier, I guess, coming into this one, but we knew it was going to be tough,” Snitker said. “It’s just that’s just a lot of innings to cover against a club like this that swings the bat so well. I mean, the good news is we’ll take a day off and be in good shape.”

Snitker tried to maximize the innings of some of the fresher arms, but in doing so, he allowed the Astros to do damage against them.

The game began with Tucker Davidson on the hill. He fits more of the traditional starting pitcher mold. Davidson has started in all five of his MLB appearances and has pitched exclusively as a starter in the minors since the start of 2018.

But that means he also hadn’t made a postseason appearance in his career, and he was only added to the roster when Charlie Morton fractured his right fibula in Game 1 of the World Series.

Despite Davidson not having pitched a competitive inning since Oct. 3, in Triple-A, Snitker said he was hoping to get about 75 pitches out of the 25-year-old southpaw.

“Even after two (innings), there’s just a lot of game to cover, we had some guys down,” Snitker said. “We were going to try and stretch him as far as we could, and I think we did.”

Davidson pitched well in the first, allowing only a walk and erasing the baserunner on a double play. But in the second, with his team leading 4-0, he gave up a single, a walk, a double and a sacrifice fly that brought the game to 4-2.

Up to 41 pitches after the second, Davidson came to bat in the bottom half of the inning and started the third. After Jose Altuve reached on an error, Davidson walked Michael Brantley, which maked the end of his night at 53 pitches. Both runners came around to score with reliever Jesse Chavez on the hill, but they were charged as unearned runs to Davidson because of the error.

The Braves took the lead in the bottom of the third on a solo home run by Freddie Freeman. But in the top of the fourth, the Astros put a runner on, and with the left-handed hitting Brantley due up with two out, Snitker turned to left-hander A.J. Minter, who promptly struck him out.

Despite Minter’s spot coming up in the lineup the next half inning, Snitker let him bat in the one-run game to try to get multiple innings out of him.

The following inning, Minter gave up two hits and issued an intentional walk to load the bases with two outs for No. 8 hitter Martin Maldonado. On a full count, he threw a pitch well inside to walk Maldonado and tie the game. He was left out to face pinch hitter Marwin Gonzalez, who blooped a single to left to give Houston a 7-5 lead.

Minter said he did not consider his appearance a bad outing, but believed instead that he was just unlucky with the outcomes.

“I felt like my stuff was just as sharp tonight as any other outing. I was getting ahead of hitters. I felt like I was 0-2, 1-2 almost every hitter and those guys, they made good quality swings on two strikes,” Minter said. “Obviously with Maldonado, I could tell he was going up there, trying to work a walk. And for me, it was just I tried to aim the ball instead of driving to the mitt. And that’s obviously the one thing I would take back. Then a jam shot, flare shot to score two runs.”

Minter had been the least-taxed of Atlanta’s dominant southpaw relievers to that point. Tyler Matzek and closer Will Smith had both pitched in Games 3 and 4. Minter showed an ability to pitch multiple innings when he went 2 2/3 in Game 1 and allowed one run to earn the win. His most recent outing was in Game 4 when he threw an inning.

Snitker said he was hoping to get multiple innings from him again, but that after the way the fifth went, he “couldn’t run him back out there.”

“It was just, you know, just hoping like he did the other day that, I mean, my God, he’s been so good. He’s had such a great postseason, and he had to work really hard. Didn’t work,” Snitker said. “We’re going to take that shot right there and see if we could keep the game in check and then go from there because we kind of felt like he was our best option. And in that situation, especially with Brantley coming up, to maybe get to where we could piece it together with the other guys.”

FOSTER: On Ian Anderson, a wise World Series decision and why we shouldn’t care so much about no-hitters

In the seventh, with Atlanta still only down by two runs, Snitker went to left-hander Drew Smyly, who hadn’t pitched since Game 2 when he worked the seventh inning with his team trailing 6-2. Smyly pitched the final three innings Sunday, but he also allowed a pair of runs on five hits, widening the gap to 9-5 instead of keeping it close for Atlanta late.

If the goal was to preserve the Braves’ remaining top relief arms — Luke Jackson, Matzek and Smith — then goal achieved. None of the three entered the game even in moments when it felt as though the lead was slipping away. The Braves could have opted to pull out all the stops in Game 5 and used their best relievers as the game was close late. Even if one or more of Matzek, Jackson and Smith had been used and Atlanta still lost, they would have had a chance to rest on the travel day before the series returned to Houston.

Snitker is hoping to avoid a bullpen game again the rest of the series. He has Max Fried going in Game 6 and would likely hand the ball to Ian Anderson should there be a Game 7. And now, for better or worse, all the team’s top relievers are going to have plenty of rest.

“(Fried is) ready to go. I mean, we had him in reserve if something happened today, we got locked up in extra innings or whatever, we were going to, you know, run him down there and then possibly use him today also,” Snitker said. “But you know, I always feel good when Max pitches. I mean, he always gives you a chance to win and, like I say, our bullpen’s in good shape, Max’s got full rest and we should be good to go.”